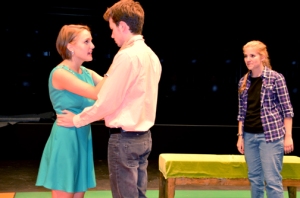 The Niles North Theater Department opens its 2013-2014 season with the Director’s Circle production of Jean-Paul Sartre’s existentialist work “No Exit,” adapted from the French by Paul Bowles. Show times are 4 p.m. and 7 p.m. on Friday, August 23 and Saturday, August 24 in the Drama Performance Center at 9800 Lawler, Skokie. Tickets are $10 and may be purchased by calling the Box Office at (847) 626-2122.

“No Exit” features three individuals who face off against each other as they face themselves for the first time. The cast includes Teresa Franks, Joanna Vaklin and Ryan Loach. Director’s Circle Designers include Nathan Selinger, Lighting Designer; Samuel Rosenfeld, Scenic Designer and Erin Rourke, Costume Designer.

Director’s Circle is an audition-only program at Niles North designed to offer an opportunity for outstanding theater students to hone their craft. The play selection is chosen to showcase the abilities of the actors and technical crew. Upon completion of this production, the students assist their teachers in the school’s theater classes, run acting clinics and work as leaders in sharing their skills with fellow drama students.