Niles North Theatre presents “As You Like It”, William Shakespeare’s romantic comedy about love and forgiveness, dukes and shepherdesses, and country life and courtly etiquette. Rosalind, the daughter of a banished duke falls in love with Orlando. When she is banished from the court, Rosalind calls herself Ganymede and travels with her cousin Celia and the jester Touchstone to the Forest of Arden, where her father and his friends live in exile. New friends are made and families are reunited. By the end of the play Ganymede, once again Rosalind, marries Orlando. Orlando and Rosalind, Oliver and Celia, Silvius and Phebe, and Touchstone and Audrey all are married in the final scene.

Don’t miss this exciting celebration of Vocal Jazz at Niles North on April 16.

Saturday, April 16, will bring over 50 of Dan Gregerman’s former vocal jazz students from locations throughout the U.S. to return to their roots, as well as reconnect with former classmates. The concert will begin at 7 p.m. in the Auditorium at 9800 Lawler, Skokie. Tickets are $10.  Niles North vocal jazz groups Take One, Sound Check and Harmonic Motion will perform several numbers.  There is also a free community performance at 10 a.m. on Friday, April 15.

The program was started in 1991 by Daniel Gregerman, and under his direction the program has grown and flourished. Although definitions of vocal jazz may differ, it can commonly be agreed to be a style of singing, either a cappella or accompanied by a rhythm section, that embellishes the melody with ornamentation or improvisation, with the ability to transform a song into something distinctive and personal. Since the vocal jazz program began, the program has gained recognition beyond Niles North’s borders, for instance, headlining the Puerta Vallarta Jazz Festival in Mexico.  In 2014, Gregerman was the recipient of the John LaPorta Jazz Educator of the Year award, an accolade for an outstanding educator with a focus on jazz education.

EMPTY WALLS is an all day event where artists from the community, staff, teachers and talented art students team up and create art the entire day at Niles North High School.  At the end of the day, they graciously donate their artwork to be a part of the silent auction which helps the 2016 School Chest charity, Chicago Coalition for the Homeless, and Niles North Art Department scholarships.  Please join us for this wonderful event!

All types of artwork will be represented at the auction including: painting, photography, drawing, printmaking, watercolor, jewelry, fiber arts/clothing, and ceramics. There will also be donations from professional artists and educators in the community up for auction. Proceeds from Empty Walls go to Chicago for the Homeless. Chicago Coalition for the Homeless is the only non-profit in Illinois dedicated to advocating for public policies that curb and can ultimately end homelessness. The organization leads strategic campaigns, community outreach, and public policy initiatives that target the lack of affordable housing in metropolitan Chicago and across Illinois. See more at http://www.chicagohomeless.org. 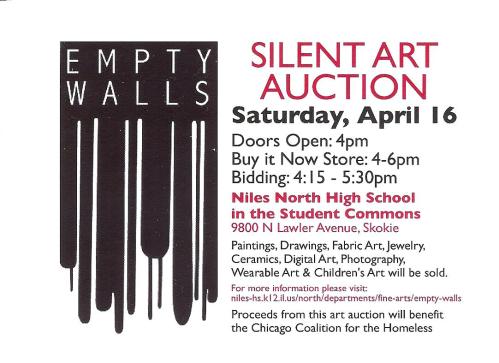 Three Niles North artists designed the winning posters for the upcoming Honoring Skokie’s Finest and Bravest Fire and Police Campaign which will be held in May. Dechen Tsechen, Cindy Salazar, and Revathi Ravindran created artwork that will be used in the campaign that will show support and gratitude to first responders in the Village of Skokie.

From May 15 to May 31, residents, businesses, houses of worship and schools in Skokie are asked to tie red and blue ribbons around trees and lampposts. This is a village-wide show of support and gratitude for our fire and police departments. Starting April 11th, ribbons will be distributed.

The Kickoff will be held on Monday, April 11 at Village Inn. Grab a meal, pick up a ribbon and mention that Skokie honors its finest. A portion of all sales will be contributed to the campaign.