Come hear the NN Choirs and Band this evening in the NN auditorium at 7:30pm. You will be entertained by the sounds of a celebration of Latino and Hispanic Cultures.

This concert is free. Prepare for an enjoyable evening!

All Niles North Community members are welcome to attend this FREE concert tonight in the Niles North Auditorium at 7:00pm. You will have an enjoyable evening listening to the beautiful sounds.

Did you know that the NN Orchestra under the direction of Jennifer Page just won a nationwide contest called the KishiBashiSpringFling? They are one of 4 schools to have won this great honor and a visit by this tremendous artist! Check it out here: http://www.kishibashi.com/blog/kishibashispringfling-finalist-announcement/

Bring some money with you tonight as we’ll also be having a bake sale and a new item for sale to benefit the orchestra and help you too!

Hope to see you there.

The Second City Comes BACK to North!

SPEND AN EVENING FULL OF LAUGHS!

This must-see evening of comedy features some of Chicago’s best and brightest in a special one night engagement. Fresh, fast and spectacularly funny, The Second City celebrates over 55 years of cutting edge satiric revues and continues to launch the careers of comedy superstars. The Second City is truly a Chicago landmark and a national treasure.

This irresistible new show features classic material made famous by Second City stars like Tina Fey, Stephen Colbert, Steve Carell as well as brand new scenes, songs and improv straight from their sold out shows in Chicago and Toronto.

Tickets for this one-night only event are $30 general seating; $50 limited cabaret seating, and $10 student-only general admission seating with an ID. Tickets (non-student) can be purchased online at http://www.secondcitycomestonorth.org For more information email to info@secondcitycomestonorth.org or call 888-797-1606, leave your name and number, and your call will be returned by a volunteer.

There will also be a 50/50 cash raffle and additional prizes the night of the event. To pre-purchase raffle tickets or to make a donation, visit http://www.secondcitycomestonorth.org/#!raffle/cdhu.  Tickets will be for sale at the event.The community is welcome to attend. This performance is suitable for audiences who are 14 years old and above. 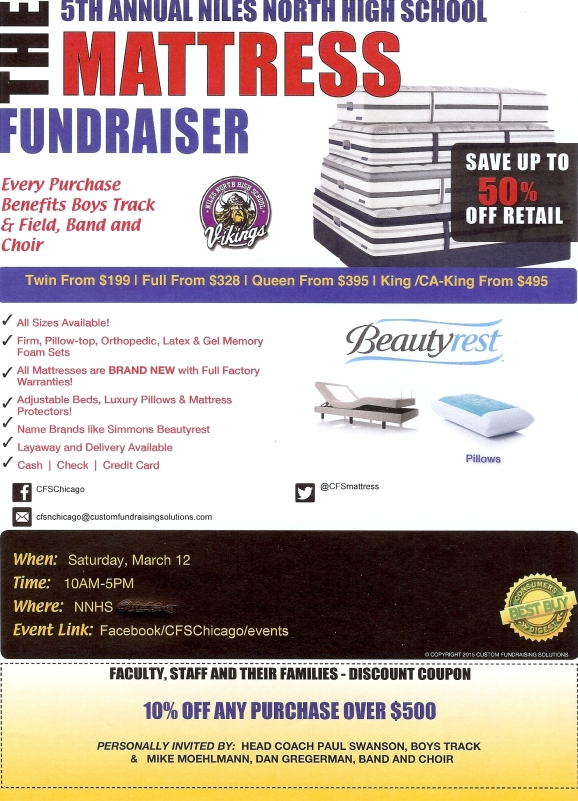 Niles North Theatre Department presents this year’s musical “13” on March 10 through 12 in the Auditorium at 9800 Lawler, Skokie. “13” is a Broadway musical, with music and lyrics by Jason Robert Brown, based on the book by Dan Elish and Robert Horn.

Imagine, at 13, being taken from the pulsing power of New York to small-town Indiana. A geek, the cute girl, the faker, the jock, the loser: everyone is trying to fit in and be noticed. The New York Times says “it has on tap that natural radioactive energy that makes young teenagers so appealing.”

Always a treat to see the D219 visual arts talent!

Over 150 works of art created by D219 art students will be on display until April 8.
Please stop by the east side of the library. Sculpture is in the case in the entrance near the book drop, 2-D work is displayed in the gallery, the large wall near the book checkout and also on the 2nd floor.