NNFAPP has teamed up with Sweet Tomatoes in Glenview! They will donate 20% of sales to us from 5 pm to 8 pm on Monday, October 28. Please bring the flyer for us to get credit. They are located at 2351 Willow Road in Glenview. Enjoy a great meal and help Niles North Fine Arts Parents & Patrons at the same time!

Hope to see you there.

Niles Township High School District 219 musicians have been invited to perform at the upcoming Illinois Music Educators Association (IMEA) District 7 Festivals. Students from the orchestra, choir and band underwent stringent auditions to qualify for the festivals. Their performances will determine whether these musicians receive an invitation to the All-State Festival in Peoria, IL, January 22 through 25; the most prestigious high school music festival in the state of Illinois, and the highest single honor a high school musician can achieve.

The following NN students have been selected for the IMEA Jazz Festival which will be held at Lakes Community High School in Lake Villa on November 16:

Come to the Choir and Orchestra Concert, Wednesday, Oct. 23

The Niles North Music Department presents a FREE choir and orchestra concert at 7:30 p.m. on Wednesday, October 23 in the Auditorium at 9800 Lawler, Skokie.

Clark Chaffee directs the orchestras. The Philharmonic Orchestra will perform “An English Folksong” by Terry McQuilkin, based on “Dives and Lazarus,” a lovely, lilting way to open the program, as well as “Little Symphony” by Carold Nunez. The Symphonic Orchestra will play “Incantations” by Richard Meyer and “Folk Tune and Fiddle Dance” by Percy Fletcher. The combined orchestras will close with “Samba, Samba,” a piece written by Chaffee that was inspired by the joyous rhythms, melodies and harmonic progressions of Caribbean steel drum music.

NNFAPP will be hosting the bake sale during the concert to benefit both the orchestra and choir students. All items will be $1.00. 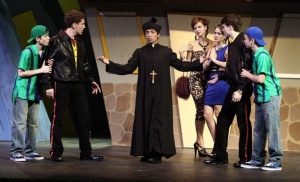 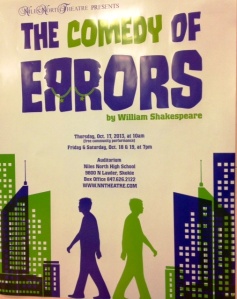 Enjoy one of the silliest, slapstick comedies by the greatest playwright of the English language when the Niles North Theatre Department stages “Comedy of Errors” on October 18 and 19. “Comedy of Errors” is the story of mistaken identity and misspent love as two sets of twins go about their near-miss adventures.